Very good! Apart from real-world objects, tuples can also be used to describe a given "state" or "position". For instance, they can represent a position in the Cartesian (x/y) coordinate system. For example, we can represent positions on various game boards. In the picture below, we represent the position of a red piece in a game of draughts (a.k.a. checkers) as (3, 1):

The red piece can move diagonally to the left or right, as shown in the example below: 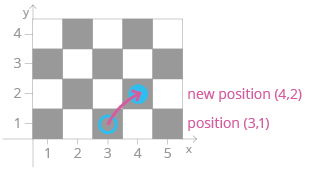 Let's try to write a function related to this movement. The function below accepts the current position as a tuple in the (x, y) format and returns the new position after a diagonal move to the right:

Note that we only make the move if the piece is not at the border of the board.

Write a function named get_new_position(position, move) which accepts two arguments: (1) the current position in the x/y coordinate system, and (2) the movement that was made.

Both arguments are given as two-element tuples, where the first element is the x value and the second element is the y value. Your task is to return the new position. Example: 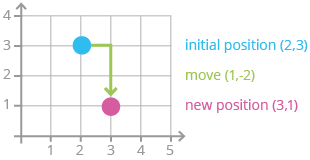 The task may seem complicated, but it is actually very simple! All you need to do is return the following tuple: