Line charts are very simple and popular plots. They are used to present time-series data, although they have some other applications too. Below, we can see the elements in a line chart: 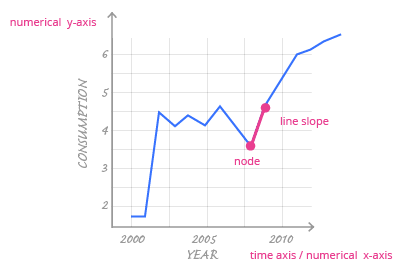 As you can see, a line chart consists of points (nodes) and lines that connect them. Unless it is necessary to show them, individual points are merged into the actual line. This focuses attention on the line and its slope rather than on the points themselves.

Line charts have a few strict usage rules. One of them deals with nominal variables. As you already know, nominal variables have no natural order. Arranging them by alphabetical order or by the changing value of some quantity is equally valid. But because they have no set order, they're not suitable for a line chart.

Suppose you decided to use a nominal value on the numerical axis. How would you decide on an order? Every time you changed how your values were arranged, you'd get a different chart. Which one would be accurate? (None of them, actually.) There is no continuation between the values, so no line can properly be used.